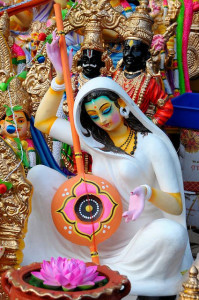 Meerabai was one of the foremost exponents of the bhakti cult and an inspired poetess belonging to the 15th century. She sang in Vrajbhasha or Vrajbhasha mixed with Rajasthani, in praise of Sri Krishna.

Meera was born in a princely family of Rajasthan. When she was a child, Raidas, a saint visited her house and gave her the idol of Sri Krishna. Meera took the idol to her heart. She decorated it, worshipped it, played with it and, in short, lived with it. She looked on it not as an inert idol but as the living Krishna.

At the appropriate time Meera was given in marriage to Bhojaraja, the crown prince of Chittor. The family of Bhojaraja were followers of  Shakti or Goddess of power, in the form of Durga, Kali, Chamundi and Parvathi. Si, in her husband’s family, her devotion to Sri Krishna began to cause displeasure among the members of the family. Her intense devotion to Sri Krishna was considered a craze.

Day by day, Meera went on spending more and more time in the company of monks and other holy persons. Bhojaraja built a temple for her exclusively  near the palace. This provided her the freedom to worship Sri Krishna. She spent the whole day in ecstasy of dance and song in the temple and in the company of monks and holy men. Her relatives concluded that she had gone mad. But the monks and holy men respected her as a great saint. Even Akbar is said to have visited her place along with the celebrated Tansen.

The royal family thought that the prestige of the family was affected because of her singing and dancing with the monks. After the death of her husband Bhojaraja, the younger brother became the king and began harassing her to the extent of even poisoning her. Meera accepted everything without protest and came out of every danger safely.

Finally Meera left to Brindavan and, in happy abandonment sang and danced before Sri Krishna. Here she was amused when an aged Jiva Goswami, a Vaishnavaite saint, refused to see her observing that he was a monk and could not see the face of a woman. Meera astounded him by replying that in Brindavan only Sri Krishna was a male. The illusion of the monk was swept away.

Meera came in touch with many great men and poets. In course of time there were political changes in her native state of Rajasthan. One Udaya Singh took over the reigns of the kingdom. He sent messengers to request her to return to the palace. Meera did not want to go back leaving Lord Sri Krishna. Making the messengers wait in the temple, she entered the temple and was not to be found anywhere in the morning. The devotees concluded that she might have got merged in her Lord, Sri Krishna.