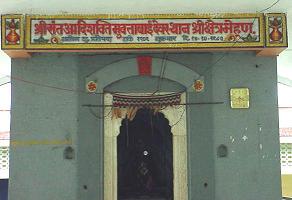 Muktabai ( A.D 1279 – 1297 ) is considered one of the pioneers of the Varkari cult of Maharashtra. The story of her life is bound with that of Jnanadev, Saint-composer of Maharashtra.

Vitthalpant Kulkarni of Appegaon, on the the banks of Godavari was married to Rukhamabai. The couple did not have an issue for a long time. after some time Vitthalpant developed an indifference to worldly life. He approached Saint Ramanand of Varanasi and expressed his wish to become a monk. He lied that he had no wife, as permission of one’s wife was required for initiation into the Order. Ramananda believed him and initiated him into sanyasa and gave him the name Chaitayananda.

Rukhamabai was not aware of the developments in Varanasi. She prayed to God for the safe return of her husband. Once, Ramanand, on his way to Rameshwaram, happened to meet Rukhamabai and on enquiry, came to know that Vitthalpant was her husband. He blessed Rukhamabai to be a mother of eight boys. On his way to Banara he instructed Vitthalpant ( Chaitanyananda ) to return to Alandi and resume the householder’s life. Vitthalpant obeyed his Guru at once.

In the years that followed Vitthalpant and Rukhamabai had four children, the first three were sons and the fourth one was a daughter. The sons were named Nivritti, Jnanadev and Sopan. The daughter was named Mukti. Though brahmins, they were treated as outcasts by the community on the ground that a monk could not become a householder again.  The atonement, according to the community was to end one’s life. Vitthalpant and Rukhamabai ended their lives by throwing themselves into the Ganges, leaving their children orphans.

Born of pure parents highly devoted to God, the gifted children had an education superior to that of many brahmins, though the community did not allow the boys to wear the sacred thread. The elder boys had to take to begging while the youngest took care of their sister Mukti or Muktabai. Jnanadev, an intellectual, assumed a challenging attitude and told the community that everyone is great since the Atman or Self ( Supreme Reality ) pervades everything, man, beasts and trees. In course of time this changed the attitude of the brahmins towards the boys to one of admiration. The pundits of Paithan, considered as a great seat of learning those days, told the brahmins of Alandi that even without initiation, the boys were far superior to the brahmins. Many anecdotes about the children possessing supernatural powers are afloat.

Jananadev completed his studies of Vedanta and other philosophies and wrote his exposition of the Bhagwad Geeta as ” Jananeshwari “. He used to visit Pandharpur and spend time with the Saint Namdev. Muktabai stayed all along with her brothers, and as time rolled by, she also was credited with supernatural powers; and was considered a saint.

Once Muktabai along with her brothers went to Pandharpur to worship Lord Vithoba. Saint Namdev who also stayed there, thought that he was dearer to the Lord than others. Muktabai saluted the Lord but not Namdev stating that mere staying in the company of God did not make one worthy of salute, and Namdev did not deserve any salute, as he had no spiritual guide as yet. After discussion Namdev was directed to meet Saint Gora Kumbhar, a potter at Alandi who would decide whether Namdev was a perfect Saint. Gora Kumbhar tested the Saints with a strip of woo. When he drew near Namdev , the latter got upset, where upon, Gora Kumbhar declared Namdev as a Kacha ( raw )pot that needed Guru to guide. Namdev then went to Visoba Kechar, a disciple of Jnanadev, and a one-time opponent. Visoba demonstrated to him that there was not a place devoid of God’s presence in the world, and that it was foolish to consider oneself superior to other Saints. Gora accepted him as a Saint, Muktabai also recognized him as such and bowed to him.

In another legend Muktabai at the bidding of her brother Jananadev, is stated to have become a spiritual guide to one Changadev Vateswar, a yogi living on the river Tapi.

Muktabai has composed many Abhang’s ( devotional verses ) in Marathi. In one verse she says that the Universe is a single piece of cloth woven with the thread of Brahman ( Supreme Reality ), and Saints should not be offended even if people say harsh words.

This was to make Jananadev come out of his hut where he had locked himself, since he was annoyed with some people. It is no exaggeration to state that the story of her life is bound with with that of her brother Saint Jnanadev, very little of her separate life is known.

Muktabai’s life was brief. She was struck by lightening and died when she was hardly eighteen years old.

Yes, yes everything has been given, whether he be, good or bad, he is mine.