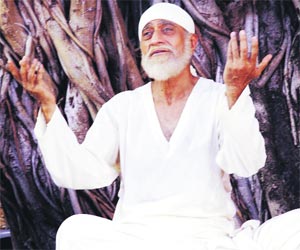 A video for the devotional Hindi album Sandesa Sai Ka was shot at Madh Island in Mumbai. This album on Vimal Music  has 8 songs of Shirdi Sai Baba sung by Vijay Prakash, Santosh Bote, Parthiv Gohil, Amey Date, Shreeparna and Sabri Brothers. Jayprakash Bhande is the director and cameraman. The album has a song Sabka malik ek in six languages including Marathi and Hindi.

Veteran actor Sudhir Dalvi essays the role of Sai Baba in the video. Produced and directed by Meena Patil and Sameer Bhosle, it has music by Ameer Rizvi and Vishal Dhumal.

Fakiri is the real Badshahi (Lordship) as it is everlasting.